In my analogue photographs, taken with a large format camera I often deal with media reflexive questions. I my series I investigate the photographic production, the photographic reproduction and the circulation and representation of images as well as their influence on our cultural memory. In my work I generally concentrate on found image and text material. In various series I re-arrange objects like books, postcard and slides, transform them and re-contextualize them. 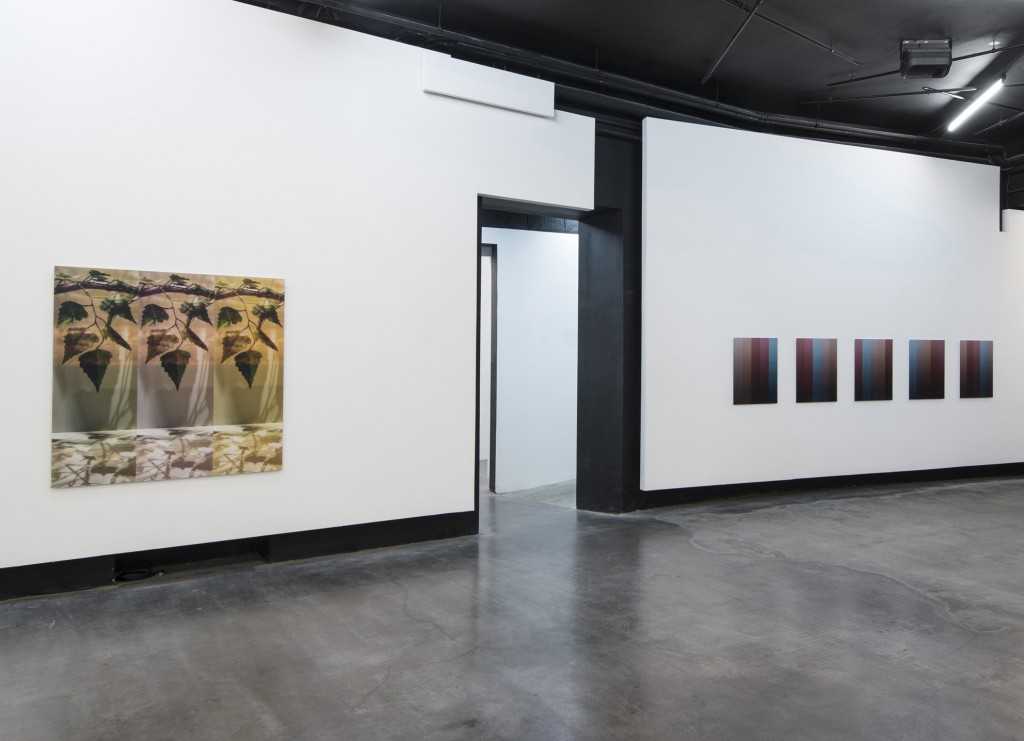 The series „Stripes“ shows several stripes, cut out from the same motif and then rearranged in one picture. If you look at „Stripes (leaves)“ you see three stripes showing exactly the same image slightly differing in colour. The series reminds us of „test stripes“ you get from a photographic lab when you want to produce a photographic print. These „test stripes“ now become the protagonists of my series and appear spliced next to each other in one image. The spectator is though confronted with a mysterious image, even more when one discovers that the depicted leaves are not real, they are made of plastic. In this series I investigate the nature, traditions, and technical processes of photography at a moment characterized by a rapid digital transformation. 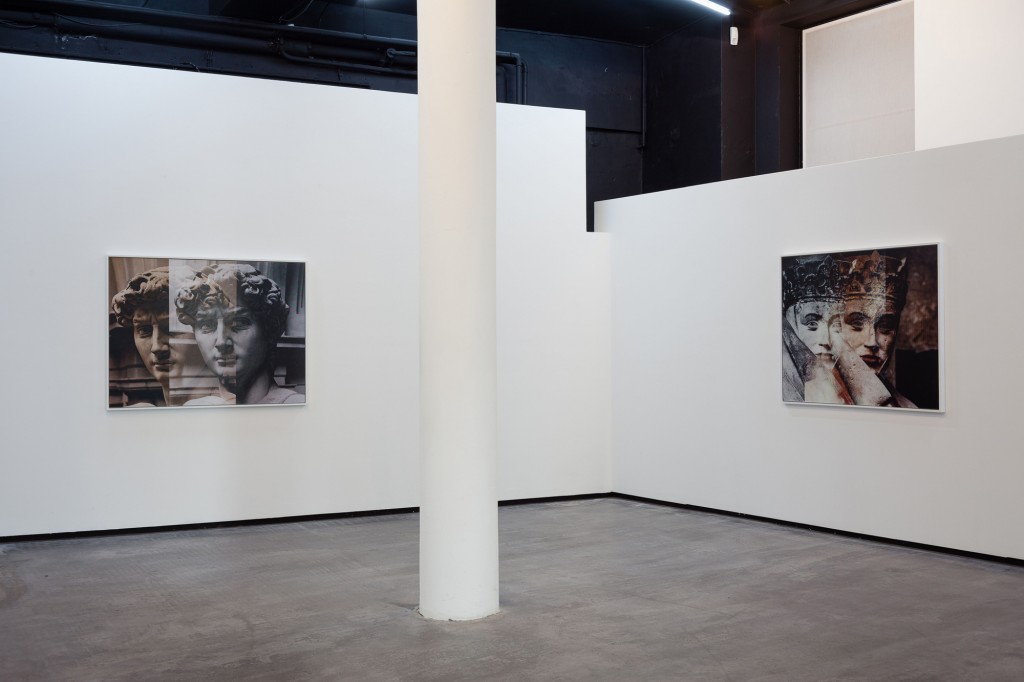 In my series “Portrait” I combine two slightly different reproductions of well-known sculptures such as “David” or “Uta” in one picture and thus caricature the inadequacy of the medium to fully depict the three-dimensionality of a corpus or a figure. In “Uta”, the cut out face of the well-known stone sculpture from Naumburg cathedral appears doubled, in a two-folded depiction. In combination with the superposition of the pictures and the grid, the perspective shift provides a mysterious touch to the picture. In the double portrait, “Uta” looks at us directly and seductively – making us forget about her true origin. 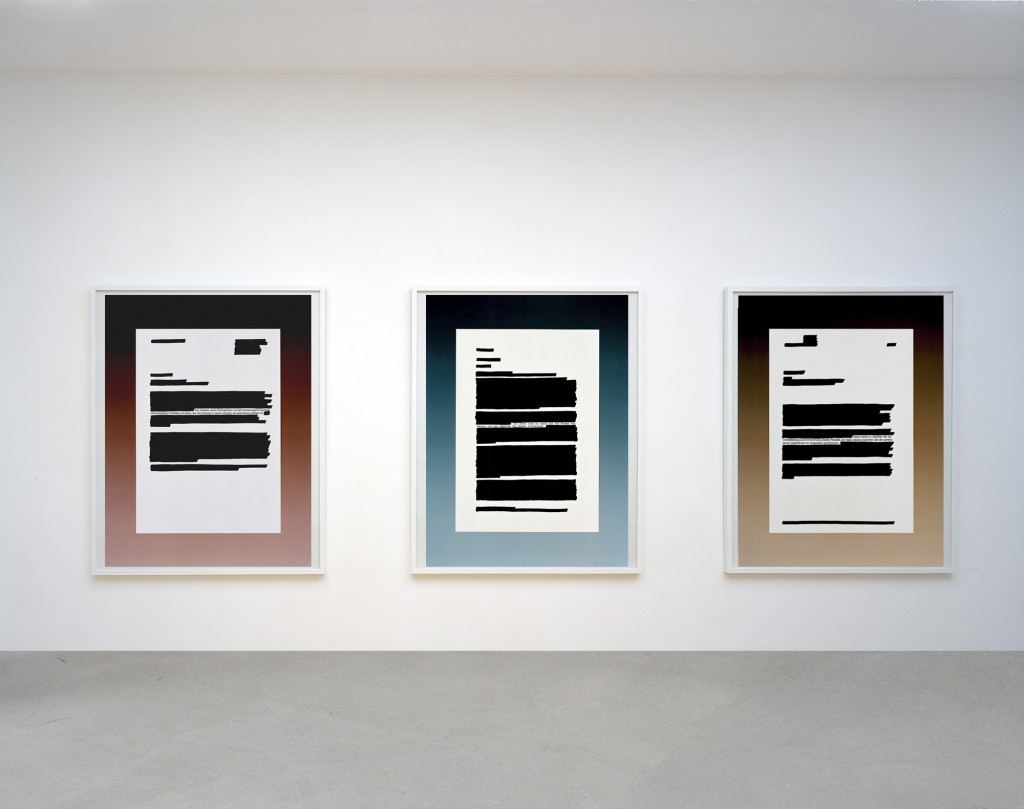 For “text” I collected press releases from galleries, which I then blackened. What remains is only one sentence or just a blackened page, which says nothing about the artist or the artwork and leaves the interpretation to the imagination of the spectator. The artist and his work remain a fictional construction. 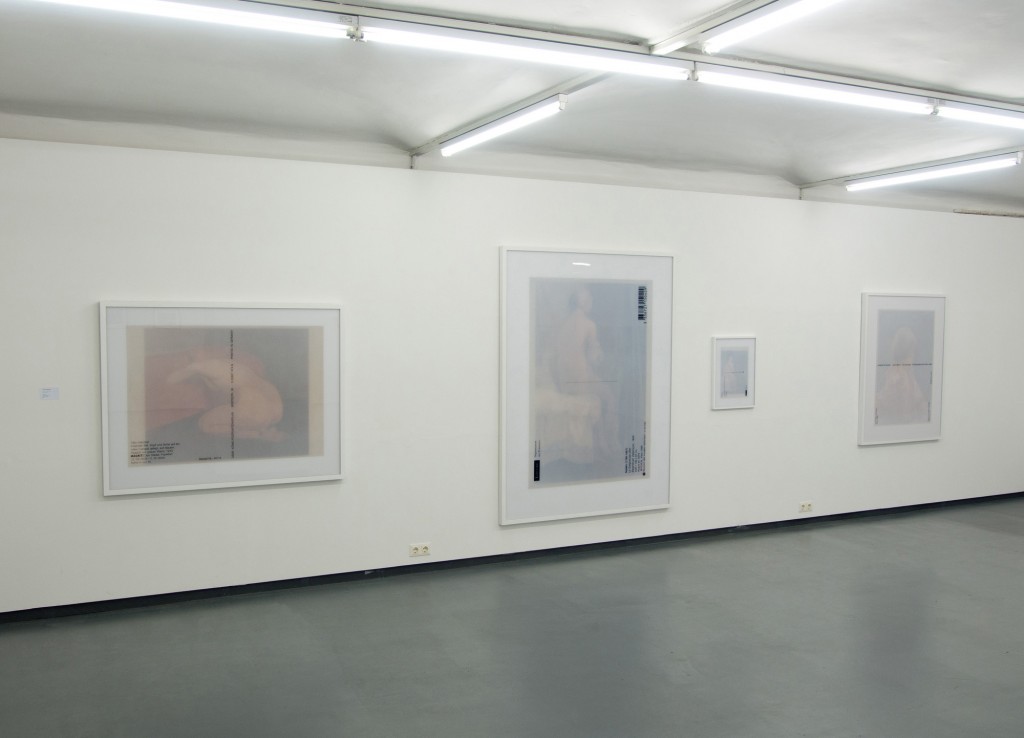 For the series “Works on Paper” I collected art picture postcards showing rear-view figures, nude or seminude female figures depicted from behind. I photographed the printed versos of the postcards so that the front motif, the female figure, shown in mirror image, is only vaguely discernable. Through enlargement the figures appear in their original size. The spectator is thus confronted with an oversized version of the standardized postcard format. In my photograph “La Baigneuse Valpincon” (193 x 144,5 cm), the famous bather by Ingre is only faintly visible, resembles though the way a still latent image gradually appears on the surface of the photographic print in the developing tub. The contemplative viewing of that female figure is actually disrupted by the postcards typography, thus providing the picture’s meta-level: inventory numbers, copyrights or barcodes are assigned to an institutional and administrative or even commercial entity. So the context of the image is revealed whereas at the same time the identity of the female figures depicted remain concealed. 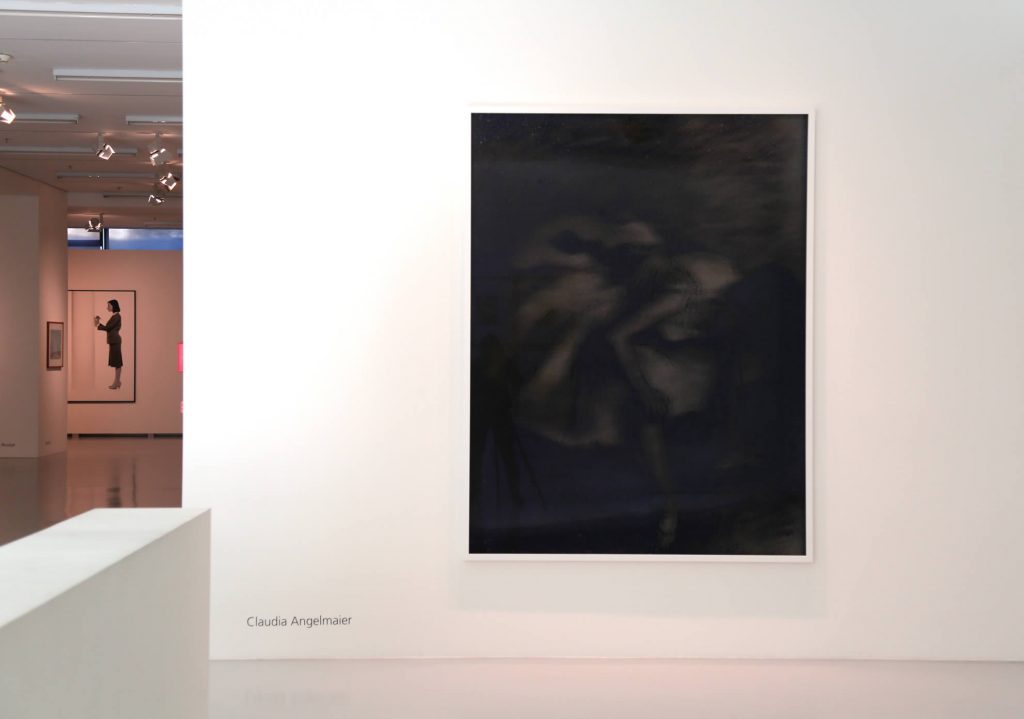 For the series “Works on glass” I collected old glass slides with signs and traces of aging. The here chosen image depicts a dancer, a well-known image by Degas. In my photograph the famous figure is hardly visible, appearing enlarged to more than life size in a brownish almost monochrom colour, over laid with marks of dust or traces of material oxidation which reminds us of ghost or aura photographs. The images of this series do not only speak of the decay of the analogue material but also about the loss of image material in general in a more metaphorical way. 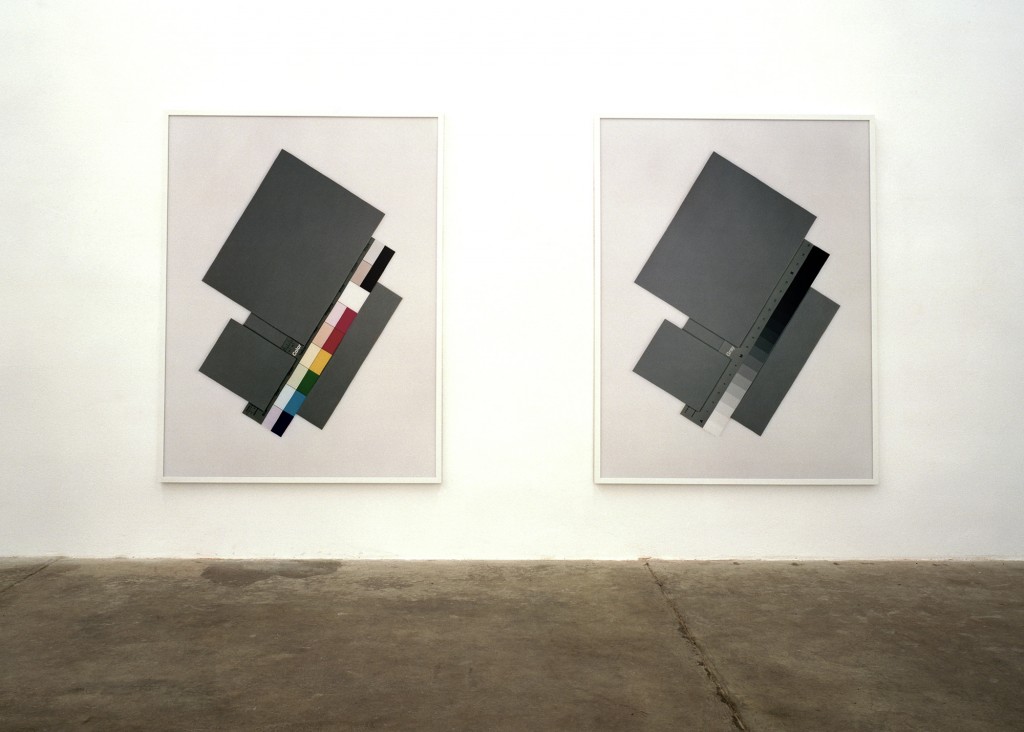 In “Color” and “Gray”, the color corrections and grey cards, tools for photographic reproductions, become the protagonists of my images, reminiscent of Supremacist compositions. These works, as large and framed pictures, do not accidentally call to mind that the medium was once invented solely to the ends of duplication. 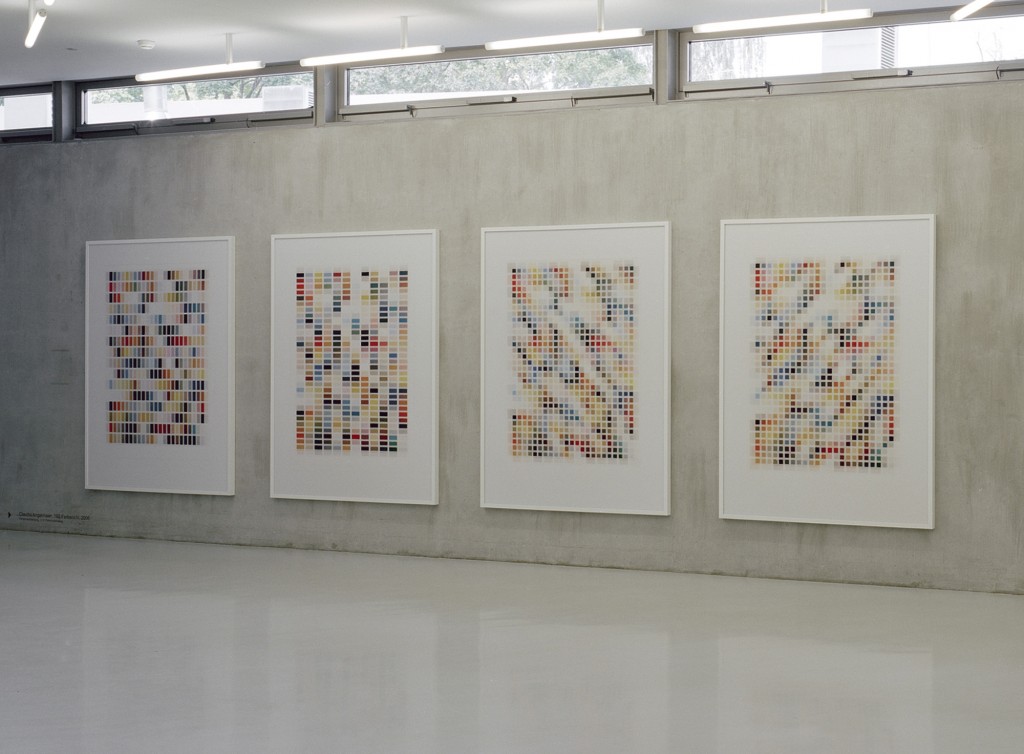 “192 Farben (Colors) I-IV” are based on a reproduction of Gerhard Richter‘s painting 192 colors, where 16 by 12 monochrome color squares form a grid of randomly placed colors. I‘m interested in the context of the image and I try to transform Richters idea of randomly generated colors into my medium through double exposure of one and the same image, slightly shifted. Depending on the degree of displacement of the layered images the original color squares were doubled and even quadrupled so that new colors and patters are generated and the original image is transformed into a new picture. 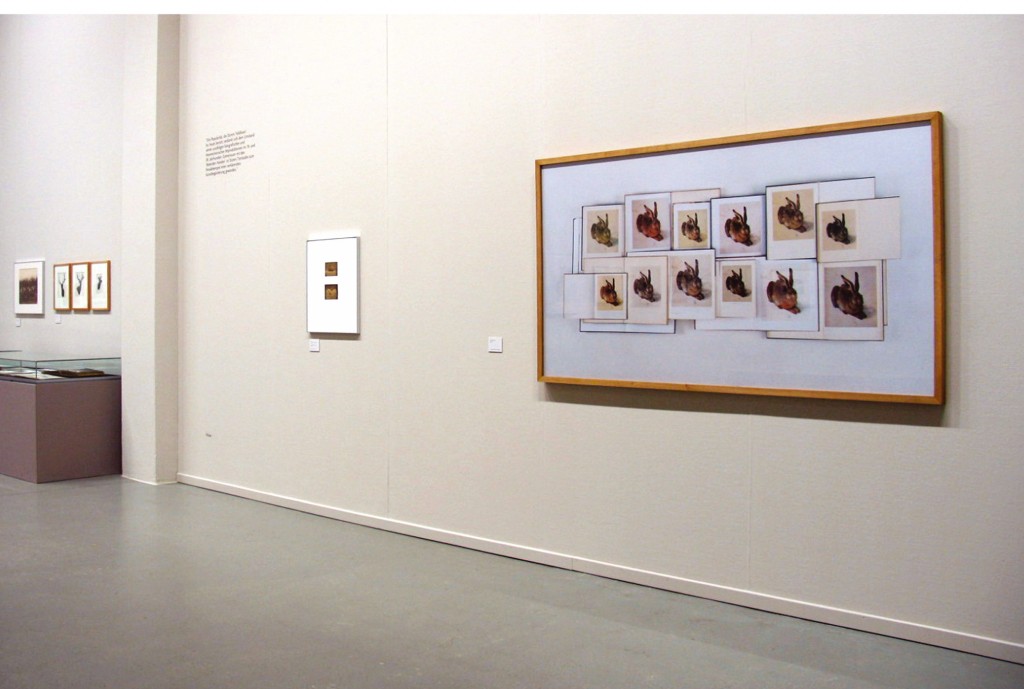 In my work entitled “Hase” (Hare), I arrange the famous hare by Dürer into a sculptural composition of twelve art historical books which are opened out and laid or layered one on top of or next to each other so that each respective page showing the hare is clearly visible. In this overview of various copies of one and the same motif (the object book appears in its original size), the reproductions shortcomings are disclosed: the hare is seen in manifold color nuances between greenish yellow and dark hazelnut brown. The “total reproduction” leads to the disappearance of the original.